Hardness is measure of polyvalent cations (ions with a charge greater than +1) in water. Hardness generally represents the concentration of calcium (Ca2+) and magnesium (Mg2+) ions, because these are the most common polyvalent cations. Other ions, such as iron (Fe2+) and manganese (Mn2+), may also contribute to the hardness of water, but are generally present in much lower concentrations. Waters with high hardness values are referred to as "hard," while those with low hardness values are "soft".

Hardness affects the amount of soap that is needed to produce foam or lather. Hard water requires more soap, because the calcium and magnesium ions form complexes with soap, preventing the soap from sudsing. Hard water can also leave a film on hair, fabrics, and glassware. Hardness of the water is very important in industrial uses, because it forms scale in heat exchange equipment, boilers, and pipe lines. Some hardness is needed in plumbing systems to prevent corrosion of pipes.

Hardness mitigates metals toxicity, because Ca2+ and Mg2+ help keep fish from absorbing metals such as lead, arsenic, and cadmium into their bloodstream through their gills. The greater the hardness, the harder it is for toxic metals to be absorbed through the gills. 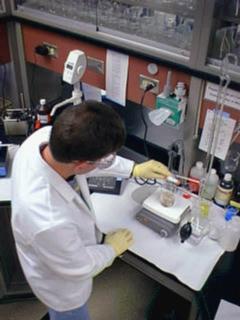 Hardness is generally measured by titration. A buffer and a color indicator are added to a volume of water. An acid (the titrant) is then added to the water, and it reacts with the Ca2+ and Mg2+ in the water. The volume of acid required to change the color of the sample reflects the Ca2+ and Mg2+ concentration of the sample. The more acid needed, the more Ca2+ and Mg2+ in the sample. Hardness is generally expressed in units of milligrams per liter (mg/l) or parts per million (ppm) of CaCO3 (calcium carbonate). It can also be expressed in "grains per gallon" (gpg); one gpg equals approximately 17 mg/L.

Hardness can also be calculated from measurements of calcium and magnesium using the following formula:

Soft waters are mainly derived from the drainage of igneous rocks, because these rocks don’t weather very easily and so don’t release many cations. Hard water is often derived from the drainage of calcareous (calcite-rich) sediments, because calcite (CaCO3) dissolves, releasing the calcium. Calcium, magnesium, and other polyvalent cations such as iron and manganese may be added to a natural water system as it passes through soil and rock containing large amounts of these elements in mineral deposits.

Drainage from operating and abandoned mine sites can contribute calcium, magnesium, iron, manganese, and other ions if minerals containing these constituents are present and are exposed to air and water. This can increase the hardness of a stream.

Some industrial processes may also produce significant amounts of calcium and manganese that are later discharged into streams.

The effluent from Wastewater Treatment Plants (WWTPs) can add hardness to a stream. The wastewater from our houses contains calcium, magnesium, and other cations from the cleaning agents, food residue, and human waste that we put down our drains. Most of these cations are removed from the water at the WWTP before being discharged to the stream, but treatment can’t eliminate everything.

Water Quality Standards and Other Criteria Regarding Hardness

Because hardness varies greatly due to differences in geology, there aren’t general standards for hardness. The hardness of water can naturally range from zero to hundreds of milligrams per liter (or parts per million). Waters with a total hardness in the range of 0 to 60 mg/L are termed soft; from 60 to 120 mg/L moderately hard; from 120 to 180 mg/L hard; and above 180 mg/L very hard.

If water is very hard, water softeners may be required to avoid deposits forming on fixtures.

Other Information about Hardness

Calcium is an important component of plant cell walls and the shells and bones of many aquatic organisms. Low calcium levels can cause osmotic problems and affect shell or cuticle secretion in invertebrates (such as crayfish and snails). Magnesium is an essential nutrient for plants and a component of chlorophyll.

Select here for a list references used in the preparation of this information
Select here for general information about other water quality parameters.
Select here for interpretation of Hardness data in the Boulder Creek Watershed
INVITATION: BASIN is a community project actively seeking public participation. We appreciate all feedback and welcome comments, suggestions and contributions. To find out more about how you can be involved, click here.
Home | Site Map | Glossary | Bibliography | Contributors
About BASIN | Attribution | Feedback | Search